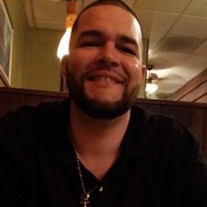 Jason Michael Monty, 36, passed away on December 06, 2021 in Port Saint Lucie, Florida. Jason was born January 20, 1985 in West Palm Beach, Florida to parents Keith and Marcelina Monty. Growing up, he attended both Seminole Trails Elementary School and Palm Beach High School. He married his wife, Angie, in March of 2014, before going on to have two daughters. Jason loved playing with his girls, cooking, barbecuing, fishing, and talking politics. He was also a man of Christian faith. He leaves behind his wife, Angie Monty, as well as their two daughters, Jayla and Ariana Monty. He was preceded in death by his father, Keith Monty; aunt, Elena Barrios; brother, Paul Garcia; and grandmother, Olga Oliva. A visitation will be held Saturday, December 18, 2021 from 3PM to 5PM with a service to begin at 5PM at Haisley Funeral Home in Fort Pierce, Florida.

The family of Jason Michael Monty created this Life Tributes page to make it easy to share your memories.

Send flowers to the Monty family.