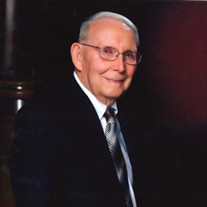 James C. Price, 96, passed away in his home surrounded by loved ones on November 23, 2021. He was born on November 8, 1925 in Miami County, Kansas near the town of Paola. He attended a one-room schoolhouse during his elementary years, and later graduated from Bentonville High School, Arkansas in 1943. He had been a resident of Fort Pierce since 1992. He was a member of the Community Church of Vero Beach, Florida for many years, where he and his wife served on the Fellowship Board. Prior to retirement, Jim worked in the retail field in store management, as well as in Hong Kong for four years as Import/Export Executive for City Products Overseas. During his time at City Products Overseas, he met the love of his life, Barbara, in Chicago. The two were married in Hong Kong in June of 1980. They spent many years traveling both domestically and abroad. Jim’s passions also included spending time with his friends and family, reading the newspaper, being a die-hard Chicago Cubs fan (since 1935), and golfing. A veteran of World War II, he served in the United States Army, Field Artillery in the European Theatre of Operations. It was during this time that Jim’s brother, Maryld, gave the ultimate sacrifice for his country at the age of 21. After the war, Jim remained in Germany briefly where he worked on the Stars and Stripes publications. He is preceded in death by his father, James “Dewey” Price, mother Edith L. Price (nee Hoffman), brother Maryld D. Price, and daughter Linda J. Price. He is survived by his wife of 41 years, Barbara A. Price (nee Kosmicki) of Fort Pierce, Florida; daughter and son-in-law, Norma A. Price and Dorian Johnson of Irvine, California; daughter and son-in-law Mary E. and Stan Moore of Dana Point, California; stepson and daughter-in-law, Sean P. and Cathy Rosedale of Belvidere, Illinois; stepdaughter and son-in-law, Dawn M. and Jeremy Morris of Blanchard, Oklahoma; granddaughter Madeline L. and Alex Powaser, step-granddaughters Ellyn M. Mason and Emma K. Morris, and step-grandsons Garrett J. Hughes and Logan M. Morris; step great-grandson Easton J. Mason. No local services are planned, however, private graveside memorial services will be held at All Saint’s Cemetery in Des Plaines, Illinois on April 19, 2022.

James C. Price, 96, passed away in his home surrounded by loved ones on November 23, 2021. He was born on November 8, 1925 in Miami County, Kansas near the town of Paola. He attended a one-room schoolhouse during his elementary years, and later... View Obituary & Service Information

The family of James C. Price created this Life Tributes page to make it easy to share your memories.

James C. Price, 96, passed away in his home surrounded by loved...

Send flowers to the Price family.