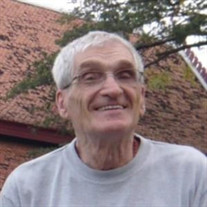 James Rhodes "Jim" Covert Born in East Randolph, NY, to Leo Ewing Covert and Audra Rhodes Covert on July 20, 1931, Jim passed peacefully in his sleep during the early morning hours of January 31, 2021. Jim was predeceased by his parents, his sister (Gene Drumm), and his son (James Ronald "Ron" Covert). He is survived by his granddaughter (Brianne Covert Cockill), a great-granddaughter, nieces and nephews, and several long-time friends that were all dear to him. Raised in East Randolph, after graduating high school Jim attended Clarkson College (a private research university in Potsdam, NY), earning a master's degree in chemical engineering. He served on active duty in the U.S. Army Chemical Corps in Ft. McClellan, AL, from 1955-1957. He then served in the Chemical Corps Reserves until retiring with the rank of major in 1971. After leaving active duty in 1957, Jim worked at Pratt Whitney Aircraft Florida in their R&D department. He then moved to Minnesota in the mid-60s and worked in R&D at 3M before retiring in 1994. Jim also earned his private pilot's license and twin-engine certification in the mid-70s. Jim loved the outdoors, enjoyed hiking and camping, and volunteering with local and international organizations. His time at the Boundary Waters Canoe Area Wilderness in Minnesota was a favorite. He also traveled around the world, working on various projects with Habitat for Humanity International. He met wonderful people during his extensive travels and remembered them and his experiences fondly. Thailand became one of his favorite places after being introduced to the country through Habitat. He traded many bitter Minnesota winters for the heat of Thailand before his travel days were over. To better care for him, Jim's family moved him from Minnesota to Florida in late 2019. He lived out his days at Lake Forest Park in Ft. Pierce, surrounded by loving staff and caretakers. Vital during the COVID lockdown, we are so grateful to them all for making "Uncle Jim" (as they fondly called him) part of their family, too. Jim lived a long and full life, seeing and experiencing a lot of this world during his nearly 90 years here. Frustrated by all that Alzheimer's disease was stealing from him as time passed, this quiet transition into the presence of his Creator, where joy and peace are immeasurable, and he is whole again, was a wonderful and welcomed blessing. His memorial service will be held at Grace Episcopal Church in Randolph, NY, later this year, and he will be interred in the East Randolph Cemetery. If you'd like to honor Jim, please consider donating to your favorite charity in his memory.

James Rhodes "Jim" Covert Born in East Randolph, NY, to Leo Ewing Covert and Audra Rhodes Covert on July 20, 1931, Jim passed peacefully in his sleep during the early morning hours of January 31, 2021. Jim was predeceased by his parents, his... View Obituary & Service Information

The family of James Rhodes "Jim" Covert created this Life Tributes page to make it easy to share your memories.

Send flowers to the Covert family.