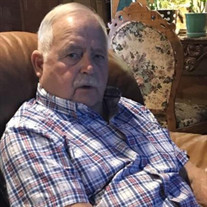 James D. Addison Fort Pierce, Florida James “Donja” Addison, loving husband, father, and grandfather passed away on November 5, 2021 at the age of 74. Donja is survived by his wife of 48 years, Janice Egers Addison; his daughter, Jennifer and husband Joe; his son, James “Bubba” Addison II and Kassy; granddaughters, Remmy and Scarlett; and sisters, Kathy Burkhalter and Elaine Addison. He was preceded in death by his mother, Gladys Addison, his sister, Margaret Knott, and his brother, Larry Addison. Donja’s most cherished childhood memories were those spent with his grandfather in Alabama. Donja went on to serve in the military. After his time in the Army, Donja married the woman he would spend the rest of his life with, Janice Egers Addison. Donja’s greatest joy was his family. Donja worked as a self-employed General Contractor. While owning his own business, he still made it a priority to attend each of Jennifer and Bubba’s school and sporting events. Donja coached his son’s little league baseball team and in 1988 lead them to the Little League Championship. Donja enjoyed spending time with his family, fishing, hunting, and making handmade custom knives. For the last three years, Donja’s best moments were time spent with his granddaughter, Remmy. As her “pop-pop” his day was not complete until he had some form of contact with her. Showing her what Fort Pierce had to offer brought immense joy to his life. Donja will be deeply missed by his friends, family, and all that knew him. A funeral service has been scheduled for Friday, November 12, 2021 at 10:00 am at Fairlawn Baptist Church in Fort Pierce. A gathering of friends and family will take place after the service at Haisley’s Reception Center, Fort Pierce.

The family of James "Donja" Addison created this Life Tributes page to make it easy to share your memories.

Send flowers to the Addison family.