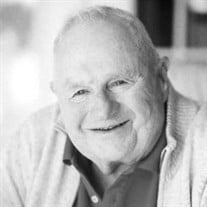 Jack Edward Dunlap passed away at 9:04 AM on March 11, 2021 at Cleveland Clinic Martin North Hospital after a difficult battle with the COVID-19 virus and congestive heart failure. He was the only child of Clair Edward and Doris Irene (Hillshafer) Dunlap, born on September 4, 1930 in Findlay, Ohio. Jack graduated from Findlay High School in 1948, where he was captain of the 1948 State Championship basketball team, and he remained friends with many of his teammates throughout his life. He married Luella Friddell, also of Findlay, on January 1, 1949 and they had five children: Charlene Kay Dunlap, James Edward (Michele) Dunlap, Nancy (Philip, deceased) Scott, Cindy Dunlap, and Sherry (Mark) Williams. He had five grandchildren: Kira (Brad) Elliott, Ryan Dunlap, Joshua (Stephanie) Prowant, Tia (Joel) Gaster, and Sara Williams. He had three great-grandchildren: Saviah Dunlap, Jaylin Gaster, and Oliver Prowant. Jack attended Findlay College and worked as an accountant at Buckeye Garwood Industries, Triplett Corporation, and for 30 years at Cooper Tire & Rubber Co., Inc. in Findlay, OH, where he retired in 1992 as Vice President and Divisional Controller. He served as president of the local chapter of the National Association of Accountants, and served on the national board of the Planning Executives Institute. Jack also served as president of the local Boy Scouts Council and was presented the Silver Beaver Award for his distinguished service to area youth. After their retirement, Jack and Lu became Florida residents at their condo in Ocean Village in Fort Pierce, and Jack served as treasurer of their condo association for 16 years. There he continued his lifetime professional principles of fiscal responsibility, property and process improvement, and focus on the future. He was well respected for the solid financial base he established for the association during his tenure. Having lost his own father when he was in high school, family was always the most important thing in Jack’s life. He was devoted to the love of his life, Lu, his wife of 72 years, who had been his high school sweetheart, and to their children and grandchildren. Jack and Lu enjoyed decades of extensive international travel and socializing with friends. They also took their entire family on several family vacations, creating lasting memories of sailing in the Bahamas with the Wood family, exploring the Rockies on a Colorado dude ranch, multiple trips to Disney World, and touring Europe as a 50th wedding anniversary celebration with a large group of friends and family. For many years, Jack and Lu enjoyed salmon fishing in the Pacific Northwest and traveling the U.S. in their RV with family. For over five decades Jack and Lu had a second home on Coldwater Lake in Michigan. When the children were young, it was where the family spent every weekend boating, water skiing, canoeing, and enjoying lake activities. In later years, as the family grew, it was the place where they gathered for birthday celebrations, holidays, and snowmobiling trips, and the lake was a beloved part of summer life for four generations of Dunlaps, their friends, and extended family. Jack was known to all as friendly, generous, and kind. He loved people, and in his later years his favorite times were those spent at his daily lunches at the Pot Belli Deli in Fort Pierce, FL, where the owner and waitresses were his second family. He was a mentor and confidant to many, a devoted husband, a loving father, and a gentle soul. He will be sadly missed by all who knew him. Due to the current pandemic, there is no service scheduled at this time. The family asks that memorial donations be made to Treasure Coast Hospice, 5000 Dunn Road, Ft. Pierce, FL 34981. https://www.treasurehealth.org/292/Donate

Jack Edward Dunlap passed away at 9:04 AM on March 11, 2021 at Cleveland Clinic Martin North Hospital after a difficult battle with the COVID-19 virus and congestive heart failure. He was the only child of Clair Edward and Doris Irene (Hillshafer)... View Obituary & Service Information

The family of Jack Edward Dunlap created this Life Tributes page to make it easy to share your memories.

Send flowers to the Dunlap family.