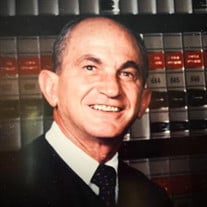 Honorable Judge James William Midelis, 86, passed away peacefully at his home of more than 40 years on February 10, 2022. He was born on December 27, 1935, to Catherine and Harry Midelis in Patterson, New Jersey. James, also known as Jim and affectionately Papou, relocated with his family in 1951 to Fort Pierce where they opened the popular Hilltop House restaurant. James was a graduate from St. Lucie County High School in 1953. Jim served in the US Air Force on active duty throughout 1958 and in the reserve until 1964 when he received an honorable discharge. In March of 1964, he married his soulmate, Gay Bent Midelis, in Palm Beach. He received a Bachelor’s of Science from the University of Florida in 1967 and his Juris Doctor degree from Florida State University in 1970. During that time, they had two sons, Jimmy and Scotty Midelis. Before returning home to St. Lucie County as an assistant state attorney in 1972, he worked for the Municipal Code Corporation in Tallahassee and then the State Attorney’s Office in Titusville. For the next 10 years, he then went on to coprosecute and prosecute nearly every major criminal case in the Florida 19th Circuit Court. He also taught two 64-hour law-related courses at the Indian River State College for years. After being a prosecutor for the state, he became a Judge of the Florida 19th Circuit Court in 1985, a role of which he served for nearly two decades. He retired as a Chief Circuit Judge but then continued to serve as a Senior Judge and then worked in the St. Lucie County Clerk’s Office until he fully retired. The only thing that echoed louder than the bang of his gavel was the sound of his laughter. Jim loved fishing and clamming with Gay in the Indian River. He looked forward to completing Sunday morning crossword puzzles. Clipping coupons and discovering bargain-priced items felt like a weekly mission and victory for him. He volunteered at the Annual Greek Festival at St. Nicholas Greek Orthodox Church, donated annually to Indian River State College and Treasure Coast Hospice and was a member of the St. Lucie County Historical Society. Jim relished hosting friends and family at his home, reminiscing and sharing stories while savoring a snifter of cognac. He was exceptional at Scrabble and played poker with friends. He was a walking encyclopedia of law. He loved watching the Florida State Seminoles and the Miami Dolphins and was converted to watch Purdue basketball. For many years, Jim reserved Friday nights for his grandchildren. He purchased new Disney movies from the local Blockbuster to watch. He played games, baked cookies and did everything in his power to see his grandchildren smile. He cherished this tradition and ensured his home was the Happiest Place on Earth. While Jim possessed more wit, charisma and self-deprecating humor than anyone, he was the patriarch and biggest cheerleader of his family. Survivors include his son, James William Midelis, Jr. and his wife, Dawn Midelis; granddaughter, Jewel Midelis; grandsons, James William Midelis III and Christopher Midelis; niece, Marina Gerold. James is preceded in death by his wife of 43 years, Gay Midelis; his son, Jeffrey Scott Midelis; his parents; his sisters and brother; and lifelong friends. A greeting will be held Friday, February 25, from 5 to 6pm at Haisley Funeral Home. Father John Mamangakis of the St. Nicholas Greek Orthodox Church will conduct the service from 6 to 7pm. Family and friends are invited to send memorial contributions in Jim’s honor to Treasure Coast Hospice https://www.treasurehealth.org/ or the St. Nicholas Greek Orthodox Church https://stnicholasfp.com/wp/.

Honorable Judge James William Midelis, 86, passed away peacefully at his home of more than 40 years on February 10, 2022. He was born on December 27, 1935, to Catherine and Harry Midelis in Patterson, New Jersey. James, also known as Jim and... View Obituary & Service Information

The family of Honorable Judge James William Midelis created this Life Tributes page to make it easy to share your memories.

Send flowers to the Midelis family.