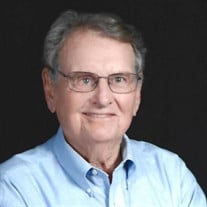 Glen Wallace Power Fort Pierce, Florida Glen Wallace Power passed into the waiting arms of his Lord on March 30, 2022 in his home, with his family and wife by his side. He was born on August 9, 1938 in Quincy, Illinois. He was then raised and also worked vigilantly on his family farm in small town Clayton. His Midwestern values and strong work ethic were invaluable to help achieve his education. Glen graduated from Central Community High School in Camp Point, Illinois. He received his Bachelor of Science in mathematics from Western Illinois University and his Masters of Mathematics from The University of South Carolina. Glen and Trixie have been pillars of the Fort Pierce community since they moved to the area in 1968. He started his career at IRSC as a mathematics professor in 1969. He was then Chairman of the mathematics department and further promoted to the Dean of Vocational Education. In 1999, Glen retired from his dedicated career after 30 years of employment. He loved challenging his students to share his passion for math and the many doors it would open for them. He met the love of his life Beatrice (Trixie) Hofmann on a blind date when he ventured to neighboring Mount Sterling. They were both attending Western Illinois University and it was love at first sight. The two have been inseparable ever since and it was a beautiful love story that lasted almost 62 years. Glen and Trixie were married on June 4, 1960 and had two children. They had a love for adventure that ranged from camping to international travel. Frequent trips were made to Trixie’s home country of Germany. He was very proud to have learned to speak the language and was a long time member of the German American Club. Here they would celebrate Trixie’s heritage and enjoy polka dancing. Family and church always came first in Glen’s life and he was a faithful member of Immanuel Lutheran Church. As passionate as he was about his religion, Glen was also a fierce competitor on the golf course. He was an avid golfer and a member of numerous golf leagues in town. His admiration for golf was mirrored by his love for motor cars and precision driving. He raced his VW Rabbit in Auto-Cross competitions for many years and was a member of the Sports Car Club of America. He also enjoyed a friendly game of chess with his buddies. Led by ‘Oma” and “Opa” as they liked to be called, the Power home was an oasis for memorable events. There was always an abundance of delicious food, mentoring, love and laughter for their grandchildren. As in his career he was always there to help with homework, especially math and all of their extracurricular activities. Glen was the Patriarch of the family and he will truly be missed for his wisdom and lifelong lessons. His legacy will continue to be cherished in the lives he touched and the hearts of his loved ones. During the last few years of Glen’s life he struggled with various health issues. His tremendous strong will and true grit determination to overcome these adversities will forever be remembered by those who were around during this time. Glen was predeceased by his parents Wallace and Edna Power along with sisters Norma Marshall and Jane Simpson. He is survived by his wife, Beatrice "Trixie" Power. Children David Guy Power and Janet Johanna Power. Glen’s six grandchildren include: Derek Power, Tyler Horvath, Ryan Power, Taryn Horvath Rains (Hyman), Trevor Horvath and Kevin Power. He is also survived by sister-in-law Karin Gustafson (Nels). He has four nieces and nephews Jeffrey Bailey, Jennifer DeSart, Steve Simpson and Cindy Roe. Memorial donations may be made in Mr. Power's name to the Indian River State College Foundation, 3209 Virginia Avenue, Fort Pierce, FL 34981. Visitation will be held on Wednesday, April 6, 2022 from 1:00-2:00 PM with a service to follow at 2:00 PM at Haisley Funeral Home, Fort Pierce. Burial will follow at White City Cemetery, Fort Pierce.

Glen Wallace Power Fort Pierce, Florida Glen Wallace Power passed into the waiting arms of his Lord on March 30, 2022 in his home, with his family and wife by his side. He was born on August 9, 1938 in Quincy, Illinois. He was then raised... View Obituary & Service Information

The family of Glen Wallace Power created this Life Tributes page to make it easy to share your memories.

Send flowers to the Power family.