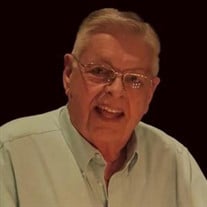 On February 12, 2002, George Edward Felix passed away in Fort Pierce, FL. He was 83 years old. Born in Waterbury, CT, George was the son of Edward Felix and Rita Mary Lundy. George was moved back to Fort Pierce Hospice prior to his passing to be with his son, David, and family so they could spend the last few weeks together and share their time together. George graduated high school and then joined the Army and served for 9 years in the Army National Guard while also selling insurance. He then took over ownership from his father the Fishing and Hunting Store in Fort Pierce. George was a member of the Fort Pierce Knights of Columbus where he served as the Grand Knight. After selling the store, George became a Real Estate agent for several years before retiring. George came out of retirement and started driving a school bus for Orange County Schools, and he loved every minute of taking the kids back and forth to school. When he finally decided he was done working and retired once and for all, he decided to travel with his beloved dogs, Tigger and Daisy. George loved to attend theater functions with his group of friends in Orlando, and he always bragged on his Grandsons’ achievements with their school and baseball, as well as his son and his wife’s career paths. He loved to be able to attend the boys’ baseball games and spend time with his son and family and his friends, and, of course, hang out with Tigger and Daisy. George is survived by his Son and Daughter-in-Love, David and Michelle Felix; his two Grandsons, Liam and Landon Felix; his Daughters, Lynda Parker (Steve) and Kris Hill (Rick); his Grandchildren, Jeff Eubank (Alexis) and Taylor Eubank; and two Great Granddaughters, Paiten and Ella. He was preceded in death by his Father and Mother, Edward and Rita Felix, and his Sister, Judy Hamilton. A memorial service for George is scheduled for March 13, 2022 at Haisley Funeral Home, Fort Pierce, FL. Visitation will be at 2 pm with a service at 3 pm. Memorial contributions may be made to the Treasure Coast Hospice, 1201 SE Indian St., Stuart, FL 34997.

On February 12, 2002, George Edward Felix passed away in Fort Pierce, FL. He was 83 years old. Born in Waterbury, CT, George was the son of Edward Felix and Rita Mary Lundy. George was moved back to Fort Pierce Hospice prior to his passing to... View Obituary & Service Information

The family of George Edward Felix created this Life Tributes page to make it easy to share your memories.

Send flowers to the Felix family.