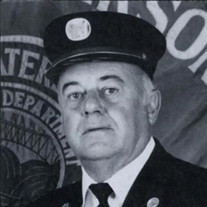 Captain Garret Knorr Jr, 84, of Port St. Lucie, Florida passed away peacefully May 1, 2022. Capt. Knorr was born July 17, 1937 in Paterson, NJ to Garret and Selma Knorr. He was a member of the graduating class of 1955 at Clifton High School. He graduated from William Paterson College in 1978 with a Bachelor of Science in Public Safety. Captain Knorr married Beverly Ann DenHerder on April 27, 1963, in Pompton Lakes, NJ. They would divorce shortly before his retirement. After his retirement he married Denyse Yvonne Pardo on May 3, 1996 in Sunrise, FL. Captain Knorr was a dedicated member of the United States Coast Guard from 1960 to 1963, the same time he was working for the United States Postal Service, he was a letter carrier until 1965. In a continued commitment to serving his community he joined the Paterson Fire Department and would remain there until his retirement in 1993. In 1981, he was promoted to Captain. He held many civic positions during his career, beginning with the Rutgers University Institute of Mgmt & Labor Relations Interest Arbitration Program in 1979, serving on the State Firefighter Labor Committee for 5 years; as well as being a sitting member on the Board of Trustees for 4 years; and participating in the NJ/NY Hazardous Material Training Emergency Response in 1990. Captain Knorr was a Fire Official/State Inspector for New Jersey in 1987 and became a NJ State Police Arson investigator in 1989. Upon his retirement in 1993, the Mayor of Paterson, NJ granted him the Mayors Award for Outstanding Civic Contribution. Survivors include his beloved children and grandchildren; daughter, Lisa Heeney; son, Garret J. Knorr; grandsons, Christian Gordon, Sean Heeney; and granddaughters, Allison Heeney and Nicole Knorr. He was preceded by his parents, Garret Knorr Sr and Selma Neukirchner; and wife of 22 years, Denyse Pardo Knorr. Family will hold services privately at a later date.

Captain Garret Knorr Jr, 84, of Port St. Lucie, Florida passed away peacefully May 1, 2022. Capt. Knorr was born July 17, 1937 in Paterson, NJ to Garret and Selma Knorr. He was a member of the graduating class of 1955 at Clifton High School.... View Obituary & Service Information

The family of Cpt Garret Knorr created this Life Tributes page to make it easy to share your memories.

Send flowers to the Knorr family.