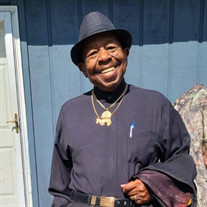 Frank L. Taylor aka Huevo, Mr. T, Oscar De Leon, was born on May 21, 1935 in Panama City, Panama, to Frank Taylor and Luisa A.Taylor. He grew up in Calidonia and Rio Abajo and attended St. Vincent School. He served as an alter boy at St. Vincent Church. Later he graduated from Artes y Oficios as an Upholster. As a young man in Panama, Frank played in the semi-professional Panamanian basketball league. In his free time, Frank could be found in Parque Legislativo known as cremling, shining shoes and teasing the girls as they passed by. Frank secured a job at Fuerza y Luz, Hotel Tivoli in Panama and The Officer’s Club in Balboa where he developed good work ethics. Frank immigrated to the United States in February1964, where he landed a job as an upholsterer at Ivy Chairs in Brooklyn, NY. On the weekends, he worked a second job at the Baby Grand Lounge. He was an avid learner. Frank took night classes at Erasmus Hall where he earned his GED and later pursued his undergraduate degree at Cornel University and New York University. He married the love of his life Marlyn Thomas on September 23, 1983. He furthered his career as an Account Administrator at J.P. Morgan Chase’s Stocks, Bonds and Security department where he worked for 31 years, until his retirement. Frank loved sports, in particular, he had a love for basketball and boxing. He was a New York Nicks fan. He also loved playing billiard. He loved to dance salsa, couldn’t get enough of his favorite singer Oscar De Leon. He thought he was the best dancer. When he moved to Florida in 2005, he played billiards at the local community center and never missed any match. He just loved to play billiards. Frank lived his life to the fullest if you asked anyone of his friends, they would say he enjoyed everything he did and would always make you laugh. He had the greatest sense of humor, anyone that spent time with Frank could see he missed his calling as a comedian. On March 9, 2022, Frank passed away peacefully at his home in Port St. Lucie, FL, surrounded by his wife, daughters, and grandson. Frank is preceded in death by mother Luisa, stepfather Joe, aunt Florence, son Anthony, niece Emerita and grandson Tariq. He leaves to celebrate his memory his beloved wife Marlyn; his daughters, Yvonne, Migdalia and Yvette; his sisters, Betty, Dorothy and Barbara; his grandchildren, Michael, Valente, Toni, Taniya, Y’lan, Travis, Yasmine, Taril, Tyler, and seven great-grandchildren. As well as a host of fabulous nieces and great grandnieces, nephews and great grandnephews and friends. What a gracious smile, What a vivaciousness, What a life’s journey. He has fought and finished his course. He is now in the blessed hands of our maker. He will be missed. A visitation will be held Thursday, March 24, 2022 from 11AM to 1PM with a service to begin at 1PM at the Haisley Funeral and Cremation Service Tribute Center 2041 SW Bayshore Blvd Port St. Lucie, FL 34984.

Frank L. Taylor aka Huevo, Mr. T, Oscar De Leon, was born on May 21, 1935 in Panama City, Panama, to Frank Taylor and Luisa A.Taylor. He grew up in Calidonia and Rio Abajo and attended St. Vincent School. He served as an alter boy at St. Vincent... View Obituary & Service Information

The family of Frank L. Taylor created this Life Tributes page to make it easy to share your memories.

Send flowers to the Taylor family.