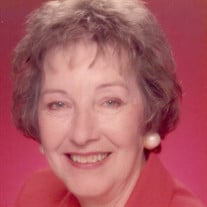 Eva May Brandenburg passed away at age 96 on January 28, 2021 at home with her family in Vero Beach Florida. She was born on September 28, 1924 and raised in Sykesville Maryland and was one of six children born to Edward McDonald and Annie McDonald (Kraft). On November 9, 1947 She married LeRoy Sellman Brandenburg who was a career Communications and Control Tower Specialist in the United States Air Force. She was a military wife and homemaker and raised her five children while living on U.S. Military Air Bases including a three-year tour at Harmon AFB in Newfoundland Canada. She is remembered with love and survived by her children Jack L. Brandenburg, Allen C. Brandenburg and Linda L. Mignolet and 12 grandchildren, Christopher, Andrew, Nathalie, Kristy, Allen Jr., Jack, Ellie, Adelle, Avery, Amy, Adrian and Neil. She is also survived by her brother Merrill McDonald and nieces Mary, Patricia, and Brenda and nephew Eddie. She is predeceased by her husband LeRoy Sellman Brandenburg, her daughter Joan Louise Brandenburg, her son Donald Edward Brandenburg, her parents Edward McDonald and Annie McDonald (Kraft) and her brothers Clayton McDonald and William McDonald and sisters Annie Ridgely and Mary Rosier. She grew up during the depression in Sykesville, a small town in rural Western Maryland and worked on local family farms, the Cedar Hurst Distillery and Ranahan Apple Butter. She was a Salesclerk at J.C. Penny’s, Braggard-Eisenberg and Macy’s department stores, and years later was a manager at her family-owned and operated Ridge Inn (now Brick Ridge) Restaurant in Mount Airy Maryland. She was a Certified Home Health Aide, a Seamstress, and Pro Shop Manager at Twin Oaks Tennis facility in Vero Beach Florida. She was also a volunteer at Bay Area Health Care and the Population Institute in Washington DC a Senior Resource Center. In addition to living on U.S. Military Air Bases, her travels included a trip to Hawaii and visits to the Bahamas, Grand Camans, Jamaica, Cancun, Caracas, Curacao, and more than 20 States. She had many close friendships and considered friends Mike Marano and Kazuo Aria to be a part of her family. She was active with U.S. Military Veteran’s groups such as the American Legion and VFW and was a founding member of American Legion Post 223 in Sykesville Maryland and was recognized for her support of Disabled American Veterans. She enjoyed the Shades of Green Armed Forces Recreation Center Resort at Disney, music, travel, dancing, playing the piano, crocheting, craft projects and most of all spending time with her loving family. In lieu of flowers, those who wish to make contributions in memory of Eva May Brandenburg may do so to Disabled American Veterans Charitable Service Trust, 3725 Alexandria Pike, Cold Springs KY 41076. She will be laid to rest at Baltimore National Cemetery with her husband LeRoy Sellman Brandenburg and daughter Joan Louise Brandenburg.

Eva May Brandenburg passed away at age 96 on January 28, 2021 at home with her family in Vero Beach Florida. She was born on September 28, 1924 and raised in Sykesville Maryland and was one of six children born to Edward McDonald and Annie... View Obituary & Service Information

The family of Eva May Brandenburg created this Life Tributes page to make it easy to share your memories.

Send flowers to the Brandenburg family.