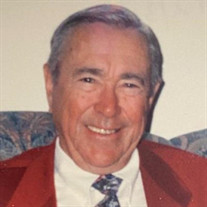 Erwin Gilbert Schultz 1929-2022 Erwin Gilbert “Erv” Schultz, 93, of Fort Pierce, Florida passed away on May 22, 2022. He was born on January 27, 1929 in the small farming community of Atkinson, Nebraska. His early years were spent excelling in school and sports, where he lettered in football, basketball and track at Atkinson High School, graduating in 1947. When he wasn’t in school or on a ball field, he spent time working at his uncle’s farm outside of Atkinson. It was in this small community, working long hours on the farm, where he developed the work ethic that would define his future professional life. After graduating from high school, he attended The University of Omaha and earned his degree in 1952. He then served two years in the United States Army Corps of Engineers and was stationed in Salzburg, Austria. He married his first wife, Mary Ann Segelberg, (deceased in 1984). He began his professional career in 1954 as the Executive Secretary of the Omaha, NE Junior Chamber of Commerce. After being promoted and serving three years as the Administrative Assistant for the Omaha Chamber of Commerce, he was named Assistant Manager of the Fargo, North Dakota Chamber of Commerce. In 1961, he was named the Executive Vice President of the Fargo Chamber of Commerce. Schultz and his family moved to Syracuse, New York in 1966, where he held the positions of Executive Vice President and President of the Syracuse Chamber of Commerce. Mr. Schultz retired in 1994 after leading the Syracuse Chamber for 28 years. During that time, he built the Greater Syracuse Chamber of Commerce into a nationally recognized business organization with more than 3,000 members and personally mentored a staff of over 50, primarily young and enthusiastic executives. The Chamber became known for its thriving, well-networked small business community, with its programming recognized by the national Institute of Organization Management of the U.S. Chamber of Commerce. Major successful projects under his watch included the $3.2 million Greater Syracuse Program, a multi-year economic development recruitment and retention marketing effort; creation of the Syracuse Foreign Trade Zone; redevelopment of neglected lands along Erie Boulevard West and on Brighton Hill into now-thriving business parks; recruitment of many companies including Southern Container Corporation; and redevelopment of the former Allied Chemical site. Schultz, the Chamber’s Convention and Visitors Bureau, and the Syracuse Hotel/Motel Association, played major roles in supporting construction of downtown’s Oncenter Convention Center. Schultz chaired the Central New York Private Industry Council and shepherded the creation of the CNY Worker Reemployment Center following a series of major plant closings and lay-offs, with that Center receiving the National Alliance of Business Award for innovative worker retraining. The Syracuse Sports Corporation, created during his tenure, attracted major sporting events and competitions to Central New York, recruited scores of volunteers to plan and support those events, and founded the Greater Syracuse Sports Hall of Fame. Schultz was involved in the planning and implementation of the Empire State Games. His leadership was also instrumental in securing the construction of the nationally renowned Carrier Dome. The Chamber was a founder of Leadership Greater Syracuse and housed that program during its initial years, beginning in 1991. Winterfest and the Jamesville Hot Air Balloon Festival are also Chamber-sponsored programs launched during his tenure. During his professional life, he served in numerous organizations including the North Dakota Chamber of Commerce Executive Association, the New York State Chamber of Commerce Executive Association and the American Chamber of Commerce Executives Association. After retiring, Erv and his wife Susan moved to Meadowood Golf and Tennis Club in Fort Pierce, Florida. They enjoyed many happy years playing golf, tennis, bridge, and poker. Schultz served on the Board of Directors at Meadowood, along with various committees, where he continued to offer his professional experience and leadership. Schultz was an avid golfer who recorded two holes in one and shot his age on three separate occasions. He enjoyed tournament, league, and leisure play with good friends and family at Onondaga Country Club and Meadowood. He passed his love of golf on to his children and grandchildren. He also loved music and enjoyed singing in barbershop quartets and playing the ukulele and the spoons. Western movies, especially those featuring John Wayne, as well as Louis L’Amour books, were also among his interests. Erv is survived by his wife of 35 years, Susan Hopkins. He was predeceased by his siblings Lavon, Paul and Scotty and his daughter, Kathy Jo Petersen. He is also survived by his son Jay Schultz (Anita) of Glastonbury, CT, daughters Lynne Schultz of Boothwyn, PA, Tricia Marsh (Wim) of Lyons, CO, step-daughters Carol Hall (David Lieberworth) of Seattle, WA, and Kristen Hall (Richard Kronbichler) of Rhinebeck, NY. He is also survived by his grandchildren Amy Messer (Derek), Jennifer Petersen (Tahnee Putman), Sasha Schultz-Boro, Tyler Boro, Sophia Schultz, Georgia Marsh, Cameron Vohr, Mackenzie Vohr, Tor Kronbichler and Lex Kronbichler, as well as great grandchildren Ashlyn and Sean Messer. Upon his retirement, US Chamber of Commerce Eastern Region Executive Director Steven Wooley summed up Erv this way, “There is an inner strength in Erv, a self-knowledge born of the Northern Plains, that has allowed him to be gentle, but not weak; powerful, but not cruel; knowing, but not arrogant; successful, but not prideful. The fruit of such an inner strength is self-knowledge about who one really is.”

The family of Erwin Gilbert Schultz created this Life Tributes page to make it easy to share your memories.