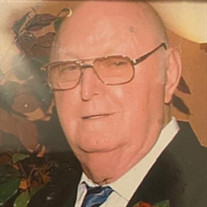 Ellie “Robbie” B. Robinson, 96, of Port St. Lucie, Florida passed away at his home surrounded by his family on December 29, 2020. Ellie was born on June 26, 1924 in Cowpens, South Carolina to Lawrence “’Tob” and Tennie (Ruff) Robinson. After high school, Ellie joined the United States Armed Forces, serving in the Navy, Army and Merchant Marines. He married Therese Wierzbicki in Las Vegas, Nevada. He worked at Publix for 14 years; and owned his own Tavern in Long Island, New York. He was a proud member of the VFW Lodge 1790 and the Masons. Ellie was proud of the time he spent in service to his country and enjoyed sharing his adventures with family, friends, and other Veterans. He was also known to share stories regarding his time with Publix. He was a family man, a business owner, a proud Veteran, and he will be dearly missed by his family and friends. Survivors include his beloved wife, Therese of Port St. Lucie, Florida; sons, Lawrence (Peggy) Robinson of Valley Stream, New York, Ray Wierzbicki of Port St. Lucie, Florida, Johnny Wierzbicki of Seaford, New York, Bobby (Tammy) Robinson of Lake Worth, Florida, and Eddie (Zippy) Robinson of New York; daughters, Vicki (Frank) Young of Lake Worth, Florida, Mimi (Tito) Mendoza of Las Vegas, Nevada, Teri (Joe) Russo of Queens, New York, Jean Marie (Jimmy) Hunt of Port St. Lucie, Florida, Lisa Rosello of New York, and Debra (Michael) Gerwan of Stuart, Florida; as well as several grandchildren, and great-grandchildren. A Graveside Memorial Service will be held at the VA National Cemetery 6501 FL-7 Lake Worth, Florida 33449 on Friday, January 15, 2021 at 10AM. Arrangements are under the care of Haisley Tribute Center.

The family of Ellie "Robbie" B. Robinson created this Life Tributes page to make it easy to share your memories.

Send flowers to the Robinson family.