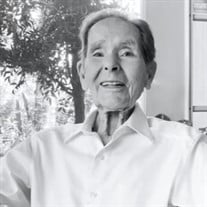 Dr. Johannes (John) Bernardus Balthasar Brolmann Dr. Johannes (John) Bernardus Balthasar Brolmann “Opa", 101, passed away peacefully June 5, 2022. He was born in Hilversum, Holland on November 20, 1920. He married Antoinette (Nettie) Brolmann on September 8, 1952 and moved to Arles in Southern France where 3 of his four sons were born. They immigrated to America, locating in Gainesville Florida in 1960 where John worked in the Agronomy Department at The University of Florida while he was earning his English doctorate in botany. There they added another son to the family. They relocated to Fort Pierce in 1969 for John to work at the University of Florida’s Research Lab for the next 31 years. He spoke 6 languages fluently as he traveled the world presenting his Research for UF. He was an Eagle Scout and a proud member of the Audubon Society, Heathcote Botanical Society, and The Florida Trail. He was an active member of St. Marks Catholic Church and sang in the choir for many years, he was devoted to his Lord and Savior Jesus Christ. He loved to volunteer and enjoyed canoeing, hiking, kayaking, and gardening. His zeal for life was contagious and he was a humble, kind, and caring man. He was a World War II survivor, spending several hard years in the German labor camps. Survivors includes four sons, Joseph "Joost" Brolmann of Canada, Wouter “Wally” (Betty Ann) Brolmann, Marten “Marty” (Anna) Brolmann both of Fort Pierce, and Jan Paul “JP” Brolmann of Costa Rica. Seven grandchildren, Lauren Brolmann Strunk, Daniel, Luke, Shane, Kaitlyne, Jason, and Kristen Brolmann. Six great-grandchildren, Christain Koehler, Harrison, Parker, and Evelyn Strunk, Johannes Luke and Jack Brolmann. Two sisters, Therese Brolmann of Holland, Catharina Holthuis of California, and one brother, Henricus “Hans” Brolmann of Holland. He was preceded in death by his wife, Antoinette, four sisters, Maria, Johanna, Adriana, Helena, and two brothers, Joseph, and Bernardus Brolmann. Memorial contributions can be made to Heathcote Botanical Gardens. A Mass of Christian Burial will be held at St. Mark Catholic Church on Saturday, June 11, 2022 at 10:00 am. Burial will be in White City Cemetery.

The family of Dr. Johannes (John) Bernardus Balthasar Brolmann created this Life Tributes page to make it easy to share your memories.

Send flowers to the Brolmann family.