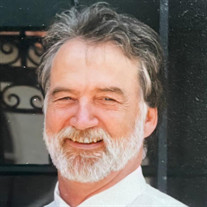 Douglas " Doug" Clifford Perkins Douglas “Doug” Clifford Perkins, age 68, of Ft. Pierce, FL, passed away on 8/31/21, at Indian River Medical Center in Vero Beach, FL. Doug was born on November 12th,1952 in New London, CT. He attended Indian Hills High School in Oakland, NJ. He earned an A.A. degree in Zoology from the University of Florida in 1974. Doug moved to Ft. Pierce in 1974 where he worked on the construction of the St. Lucie Nuclear Plant before working in management at Aamco Transmissions and Tire Kingdom. He was married to his wife, Sherry Perkins, for 25 years. Doug enjoyed, fishing, golfing, playing guitar, rooting for his Florida Gators, and spending time with his family. He was known for his quick wit and love for a good debate as well as his booming laugh that could fill even the largest of rooms. It was apparent from a young age that Doug was very intelligent, as he found an error in the World Book Encyclopedia when he was in third grade. Doug is survived by his wife, Sherry Perkins of Ft. Pierce, FL, his sons Robert Perkins (Amber) of Ft. Pierce, FL, John Long (Stacey) of Ft. Pierce, Greg Long (Brandy) of Houstonville, KY, James Perkins (Rebekah) of Ft. Pierce, FL, and Travis Perkins (Iesha) of Rockville, MD, in addition to his 9 grandchildren and his sister Gail Fink (Frank) of Vero Beach, FL and niece and 3 nephews. He was preceded in death by his parents Clifford and Ruby Perkins of Ft. Pierce, FL. A memorial gathering will be held on Tuesday, September 21, 2021 from 12PM - 1PM with a Memorial Service to start at 1PM at the Haisley Funeral Chapel 3015 Okeechobee Road Fort Pierce, FL 34947.

The family of Douglas Perkins created this Life Tributes page to make it easy to share your memories.

Send flowers to the Perkins family.