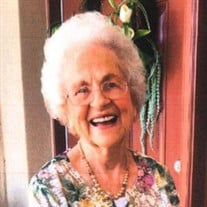 Doris Keen Odom The greatest generation could be defined in the life of Doris Keen Odom, who passed away April 17, 2021 at the age of 97 in Fort Pierce, Florida. Born October 11, 1922. The Keen family were a true pioneer family established in St. Lucie County in 1885. Doris was the second oldest daughter of seven children. She exemplified the women of that era who learned that courage and determination were essential to building a future for her family. As a young girl, Doris was taught responsibility by pitching in with the many chores required of an agricultural existence. Doris met her husband, John Gordon Odom, a Coast Guardsman who was stationed in Fort Pierce during WWII. They were married in 1942 and had two children, John Gordon Jr. and Roger Alan. After the war Doris and her husband made their home in Fort Pierce. Doris enjoyed nature, cooking, gardening, the mountains and had a passion to serve others. Doris developed a special bond for her first and only cat “Cleo”. Her love of cooking led to her employment at St. Lucie County’s school nutritionist for 45 years. The students who were fortunate to have attended those schools will remember the tasty and nutritional meals at lunch time. Such as: roast beef, mashed potatoes, collard greens, sliced tomatoes and a carton of milk. In stark contrast of today’s typical fare of pizza and sugar laden sodas. Her family left behind is her sister: Martha McManus, David Keen her youngest brother and his wife Joy. Doris was preceded in death by her husband, John G. Odom and her son Roger A. Odom. Doris is survived by her oldest son, John G. Odom, Martha Odom (previous wife) and Louise Odom (daughter-in-law). In addition, Doris had granddaughters, Kimberly Odom, Susan Odom, Jennifer Odom, and two other grandchildren from her deceased son, Roger Odom. Doris was a member of Westside Baptist Church for 26 years. She loved God, country, and family. She had a wonderful sense of humor, a welcoming smile, and a kind and generous heart. Doris was always a lady, and it was always a joy to be in her company! Services: Visitation will be held on Monday, April 26, 2021 from 1:00-2:00 PM with a service to follow at 2:00 PM at Haisley Funeral Home, Fort Pierce. Burial will follow at White City Cemetery.

Doris Keen Odom The greatest generation could be defined in the life of Doris Keen Odom, who passed away April 17, 2021 at the age of 97 in Fort Pierce, Florida. Born October 11, 1922. The Keen family were a true pioneer family established... View Obituary & Service Information

The family of Doris Keen Odom created this Life Tributes page to make it easy to share your memories.

The greatest generation could be defined in...

Send flowers to the Odom family.