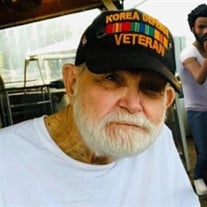 Donald James Willems Sr. Fort Pierce, Florida Donald James Willems Sr. passed away on January 10, 2022. Don was a lifelong resident of Fort Pierce, FL. He was of the Catholic faith and attended school and Church at St. Anastasia. At an early age, he voluntarily enlisted in the U.S. Army where he served in the Korean War in the 8th Army as a Combat Engineer attaining the rank of Staff Sergeant. When he returned from Korea, he attended mass at St. Anastasia and met Joan. They both attended a beach party and fell in love. Don and Joan were married on June 18, 1955. They both wanted a big family, and they created one. Don was a General Contractor, he owned and operated Don Willems Builder Inc. with his sons. Over the years they have built many buildings in the Fort Pierce area. Don is survived by his children, Tanya (Jay) Knappman of Merritt Island, Donnie (Sandra) Willems of Fort Pierce, Tama Clasby of Stuart, Teddy (Shirley) Willems, Jon Willems, and Marty Willems all of Fort Pierce; Brothers Leo and Alan Willems of Fort Pierce, and Bobby Willems of Marshall, NC; 20 Grandchildren: Jilian, Donnie III, Brandon, David, Courtney, Brittany, Teddy Jr., Colton, Jarryd, James Jr., Trevor, Kristian, Jon Jr., Kyle, Chloe, Cody, Logan, Megan, Reinaldo, and Renan; and 23 Great-Grandchildren. He was preceded in death by his parents Theodore and Florence (Guettler) Willems, wife Joan, daughter Melissa, son David, brother Norman, and son-in-law, David Clasby. Services: Visitation will be held on Friday, January 21, 2022 from 4:00-6:00 PM with a Wake Service at 5:30 PM at Haisley Funeral Home, Fort Pierce. A Mass of Christian Burial will be held on Saturday, January 22, 2022 at 11:00 AM at St. Anastasia Catholic Church, Fort Pierce. Burial will follow at Riverview Memorial Park. A reception will follow at the Willems Home on Hartman Road.

The family of Donald James Willems Sr. created this Life Tributes page to make it easy to share your memories.

Send flowers to the Willems family.