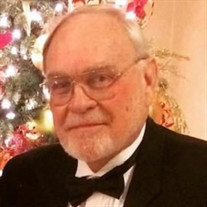 Donald William Hecker Sr. November 26th 1937- October 11th 2021. Son of the late Cecilia Ramelli and Julian Hecker Sr. Siblings of the late Julian Hecker Jr and Jerry Hecker. Don Sr passed away on the evening of October 11th 2021 in Port St. Lucie Florida to meet his Lord & Savior Jesus Christ. Along with his beloved siblings, Don Sr experienced a childhood full of love growing up in Louisiana. His legacy will continue through his wife Diana Hecker. He was also the loving father of Donald William Hecker Jr (Junior) and is wife Sasha Hecker. And a very proud grandfather of Aubrey and Camila Hecker. Don Sr was born and raised in New Orleans, Louisiana. He grew fond of the sciences and mathematics and chose to pursue an education at Louisiana State University in petroleum engineering while also playing the trombone at the school’s band. Where he completed his undergraduate and graduate degree as summa cum laude. He, then, pursued a career in the oil business through Union Oil Corporation. Later becoming the President of Main Energy Inc. in Houston Texas from 1991 to 2009 when he retired. When he was not working, he would delight in the sounds of Jazz, Classical and Salsa music. He was also an avid fisherman. He’d love to go out in the gulf with friends on his sailboat (Dry Martini) to catch Redfish, Speckled Trout, Billfish, Snook, Tarpon, Snapper, Grouper, but of course his personal favorite: the trophy Sailfish to mount on his wall. And was very into the culinary arts. He loved immersing himself in the kitchen creating a variety of dishes. Being from New Orleans he loved the Cajun Cuisine from gumbo, to jambalaya, to a good ol’ po boy, Osso Bucco, and his world-famous crawfish etouffee, he also enjoyed baking cakes, making crab cakes, cooking steak. If you want it, he could make it. When he wasn’t doing any of that, he’d also take yearly vacations with his beautiful wife, Diana Hecker to see the world to include; Asia, Europe, the Caribbean, and travel around America. His many nephews, nieces and family members saw him more as a father than anything else. He was a man of very few words; however his walk spoke volumes of the man he was. Everyone that met or surrounded themselves around him, aspired to be a little more like him. A man always putting others before his own needs. Don Sr truly lived a life of service. An intimate Celebration of Life gathering will be held at the Haisley Funeral & Cremation Service Tribute Center, 2041 SW Bayshore Blvd, Port St Lucie, FL at 1:00 PM Sunday 17th of October 2021.

The family of Donald W. Hecker created this Life Tributes page to make it easy to share your memories.

Send flowers to the Hecker family.