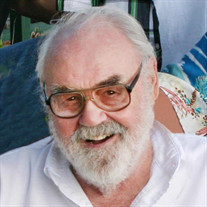 Donald Earl Clark, 92, passed away on June 23, at his home on North Hutchinson Island in Fort Pierce. Don was a native of Landsdale, PA, but moved to Fort Pierce in 1957 with his wife, Jane, and two small children, and has been a Fort Pierce resident ever since. He graduated from PMC in 1946 and entered the U. S. Marine Corp. In July of 1951 he married the love of his life, Jane Deisroth, and the couple would have celebrated their 70th anniversary the 28th of next month. In the early 1950’s, Don was working as a copyboy and later as a reporter at the Philadelphia Bulletin rubbing elbows with the likes of Frank Sinatra and Grace Kelly; however, Don and Jane decided early on that they did not want to live their lives in the land locked state of Pennsylvania. The decision to move to Florida was unanimous. Moving to Fort Pierce was a happy accident, as that is where Don found work with Maul Industries in the building industry. He found himself to be good at drawing plans for buildings and worked for years selling other building supplies. Ultimately, he settled into a career as a self-taught draftsman, working under a number of local architects as the size of the projects warranted, for whatever families or businesses could afford to pay. His favorite projects were family residences, and he designed beautiful homes for many lucky Fort Pierce families. He was a man that did business on a handshake and his word was his bond. True to his vision of living his life in Florida, Don was an avid boater, fisherman and skin diver. Many days were spent rowing out into the surf in a small aluminum boat to retrieve lobster by hand, drawing them out with a ticklestick, and measuring the keepers by a hand-made copper gauge. In the late 70’s he built his dream home himself on North Hutchinson Island, where he and Jane still reside. Donald is survived by his wife Jane, his children Janie Clark Hinkle (Mike), Jimmy Clark, Donna Clark Johnstone, Peggy Clark Emerson (Buddy), grandchildren Megan Hinkle, Sam (Kristin) and Logan Johnstone, Clark and Ollie Emerson, and great grandson Adrian Johnstone. A celebration of life is planned for Friday, July 2, 3:00 pm, at Haisley Funeral Home on Okeechobee Road in Fort Pierce. Everyone is welcome and reception to follow in the Haisley Reception Center. In lieu of flowers, the family suggests donations be made to Treasure Coast Hospice Foundation, 1201 SE Indian Street, Stuart, FL 34997.

Donald Earl Clark, 92, passed away on June 23, at his home on North Hutchinson Island in Fort Pierce. Don was a native of Landsdale, PA, but moved to Fort Pierce in 1957 with his wife, Jane, and two small children, and has been a Fort Pierce... View Obituary & Service Information

The family of Donald Earl Clark created this Life Tributes page to make it easy to share your memories.

Send flowers to the Clark family.