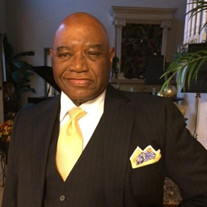 Dennis E. Stephen Jr was born on September 12, 1941 in the U.S. Virgin Island of Saint Thomas to the late Helen F. Hodge Fleming and the late Dennis E. Stephen Sr. He passed away suddenly at the age of 79 years on Thursday, February 25, 2021. Dennis attended catholic school in the Virgin Island prior to moving to New York City at and early age with his mother and siblings. As a child, Dennis made comparisons of what NYC would be like as compared to life on the island. He often recalled how happy he was when the day arrived to leave the island. He headed to NYC with his grandmother in charge of the group of children which consisted of his grandmother’s son Rudy, his cousin Merle, his brothers Giles and Lorne and his sister Laverne. Dennis attended Public School #26 and then entered James Fennimore Cooper Junior High School. While going through school, he always had a part time job. His longest tenure was working in the New York Public Library System. He also worked on Wall Street, the financial capital of the world. In 1959, Dennis graduated from Seward Park High School and enlisted in the United States Army, which began a military career that would span 26 years. He was 17 years old. Fifty percent of his military time was spent overseas; three years in France, five years in Germany, two years in Korea, one year in Thailand, and two years in Vietnam. His military specialty was combat arms which consisted of infantry and armor. He rose from the rank of Private E1 to First Sergeant E8 and culminated his enlistment with attendance at the United States Army Sergeant Majors Academy. While in the military, he completed his civilian education at the University of Maryland. After dedicating 26 years to defending our country, he retired from the military in 1985. He worked in the corporate world for years prior to retiring from GS4, formerly Wackenhut, in 2012. In his life journey he was married four times and fathered a daughter (Angela Stephen) and a son (Roderick Stephen). His children provided him with four grandchildren and two great-grandchildren. Today we say goodbye and we love you for the last time in this life as you move on to join other family members who preceded you in death. Our many loving moments together will never let you be forgotten. The loved ones you are leaving behind will never forget those special times spent together. Dennis leave to cherish his memories; his wife, Darlene Stephen; a son, Roderick Stephen ( Danyelle); a daughter, Angela Stephen; four grandchildren, Kea’nah King, Nijeal Stephen, Londyn Stephen, and Prince Stephen; two great-grandchildren, Keyon King and Londyn Stephen; four brothers, Giles Stephen (Marlene), Lorne Stephen, Verne Flemings, and Vernon Flemings; two sisters, Laverne Waters and Sandra Flemings; one stepdaughter, Myra Minter (Ryan) and step-granddaughter, Lexas Jennings; and a host of nieces, nephews, relatives and friends. A visitation will be held on Friday, March 12, 2021 from 10AM to 12PM with a service to start at 12PM at the Haisley Tribute Center 2041 SW Bayshore Blvd Port St. Lucie, Florida 34984. Burial will follow at Rolling Oaks Cemetery.

Dennis E. Stephen Jr was born on September 12, 1941 in the U.S. Virgin Island of Saint Thomas to the late Helen F. Hodge Fleming and the late Dennis E. Stephen Sr. He passed away suddenly at the age of 79 years on Thursday, February 25, 2021. Dennis... View Obituary & Service Information

The family of Dennis E. Stephen Jr created this Life Tributes page to make it easy to share your memories.

Send flowers to the Stephen family.