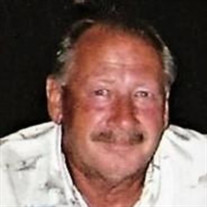 Dennis J. Kiick, passed away peacefully after a lengthy illness January 17, 2022 in Port St. Lucie, Florida. Born April 18, 1944 in Ephrata, PA, Dennis was the son of the late, John C. Kiick, Jr and the late, Alverta (Hertzog) Kiick. He grew up and attended school in Ephrata, PA. He attended Augusta Military Academy in Ft. Defiance, VA. Dennis married Eileen (Eshleman) Kiick and together they shared a fun-loving marriage for 59 years. Dennis always enjoyed hunting, fishing, and boating. He also enjoyed watching his sons play football throughout their school years. He was a car salesman until 1975, when Dennis and Eileen opened a wholesale jewelry company, they co-owned the Ephrata Jewelry Outlet; established the Gold and Silver Mining Co. at Plain and Fancy Farm in Bird in Hand, PA. In 1984, Dennis and Eileen moved to Florida, where he stayed in sales. In 1990, Dennis became a Sales Rep for Nanco (a wholesale gift and souvenir co.), he traveled a lot with his new sales position. Eileen soon joined the company and together they combined territories and traveled as a team. They would travel from the Florida Keys, throughout Florida, and the Gulf Coasts of Alabama, Mississippi, Louisiana, and Texas. Dennis enjoyed going to the “Fall Trade Shows” in Galveston, Panama City, Gatlinburg, and Myrtle Beach where Nanco was an exhibitor. Finally retiring in 2011, they continued to travel to Gulf Coast casinos purely for relaxation. In addition to his loving wife, Eileen; Dennis is survived by his sons, both of Port St. Lucie, FL, Troy Kiick and Matthew (Catherine Sikes) Kiick; twin grandsons, Cooper and Colton Kiick; sister, Lorna Ravegum of Akron, PA; stepbrother, Sid (Judy) Wenger of Leola, PA; sisters-in-law, Rosemarie Wert of Sebring, FL, and Bernice (Jim) Yeagley of Lebanon, PA, as well as numerous nieces and nephews and other family members. He was preceded in death by his mother, Alverta, father, John and stepmother, Jane. A Celebration of Life will be held privately at a later date. Dennis will be greatly missed by those who knew and loved him.

The family of Dennis J. Kiick created this Life Tributes page to make it easy to share your memories.

Dennis J. Kiick, passed away peacefully after a lengthy illness...

Send flowers to the Kiick family.