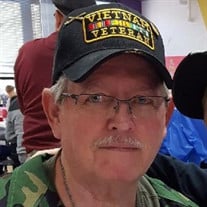 Daniel Gary Hartsfield, 73, died September 11, 2021 in Columbia, Missouri. Mr. Hartsfield was born on June 8, 1948 in Fort Pierce, Florida to Charles and Verna Hartsfield. Daniel graduated from Dan McCarty High School in 1967. He then joined the Army in March of 1968 and was sent to Vietnam in August of 1968 and then returned home in August of 1969. He served in Ft. Riley, KS, for the remaining of his military time until December 28, 1970 after coming home from Vietnam. He received several medals including: the National Defense Service Medal, Two Overseas Bars, Air Medal, Vietnam Service Medal, Vietnam Campaign Medal W/60 DVC, Sharpshooter (M-14 Rifle), and Marksman (M-16 Rifle). Daniel took great pride in his military service. He had lifetime memberships in Vietnam Veterans of America and in VFW and he always enjoyed going for coffee in the mornings with his military buddies in Columbia, MO He retired in 2006 from County Clerk’s Office after 35 years of service and moved to Columbia, MO. Survivors include his high school sweetheart of 53 years, Karen (Franklin) Hartsfield; son, Keith (Celeste) Hartsfield; daughter, Elisa (David) Pinkley; granddaughter, Haylee Hartsfield; grandson, Joey Pinkley; sister, Linda (Joe) Johnson; 2 half-sisters, Kathryn Davis, and Patricia Williams; and several nieces and nephews. He was predeceased by his parents, Charles and Verna Hartsfield and mother-in-law, Elsie Franklin. He truly enjoyed spending time with his children and grandchildren and he will be sorely missed by all. Special thanks to all of Daniel's doctors at the Harry S. Truman V.A. in Columbia, MO. Daniel is in good company now in heaven, talking to his parents and in-laws, watching Mizzou football, and fishing with his Veteran friend, Henry. He is free of pain and misery from Parkinson's Disease and Leukemia caused by Agent Orange. Visitation will be held on Friday, September 24, 2021 from 5-6:00 PM with a service at 6:00 PM at Haisley Funeral Home. A private family interment will take place at Hillcrest Memorial Gardens. In lieu of flowers, the family is requesting that donations be made to Central Missouri Food Bank, 2101 Vandiver Dr., Columbia, MO, 65202, (Please note "In memory of Daniel Hartsfield" on correspondence)

The family of Daniel Gary Hartsfield created this Life Tributes page to make it easy to share your memories.

Send flowers to the Hartsfield family.