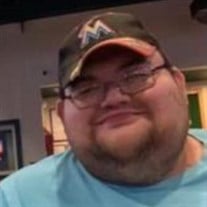 Dana Michael Child, 38, passed away on May 5, 2021 in Port Saint Lucie, FL. Dana was born in Berlin, VT on July 25, 1982 to Michael and Tracy Child. Along with homeschooling Dana attended Saint Lucie County schools including, Fort Pierce Elementary, Southport Middle School, and Indian River State College. He worked in many different industries such as an instructional aide at IRSC in the computer lab, an associate for Kmart of Fort Pierce, and lastly a customer service associate at Superplay USA of Port Saint Lucie. Dana enjoyed collecting board and card games as well as magnets. He also loved nascar, wrestling, and space exploration. His most precious times were spent cheering on his brother’s wrestling shows, playing Disney board games with his nieces and even “letting” them win at times. He is survived by his parents, Michael and Tracy (Keough) Child; Siblings, Bobbi Child, April Child (Christopher) Disler, Eric Child (Marina Tucker); Nieces, Sophia and Rylie Disler; grandmother, Barbara Keough of Florida and great-grandmother, Mae Jowers of VT as well as many aunts, uncles, and cousins. Dana was preceded in death by his grandfather, Howard Keough of FL and his nephews, Jack and Christopher Disler. Dana was always very soft spoken and generous. He would give the shirt off his back to help someone in need. He loved music but especially the band Journey. Dana will be missed tremendously by all of those who knew and loved him.

The family of Dana Michael Child created this Life Tributes page to make it easy to share your memories.

Send flowers to the Child family.