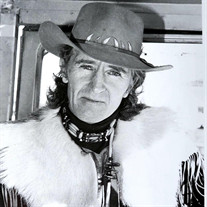 Clayton Thomas Sheperd, 81, passed away February 2, 2022 in Port St. Lucie, FL. Tom was a horseman, mountainman, sled dog musher, and adventurer born in Toledo, Ohio to parents Graydon Sheperd and Pearl Pickering Sheperd. Tom graduated high school and went to Michigan State University to become a farrier and jockey. He opened a blacksmith shop in the building that used to be his mother’s grocery store in Haskins, Ohio and spent his time shoeing and training horses. Tom co-owned a racehorse, Beaver’s Wimpy, who he jockeyed at the Tri-State Rodeo in the three-eighths mile in 1963 to beat the world record last set in 1906. His profession would lead him to a horse ranch in Georgia, and later to California, before heading back to Ohio to open up a new blacksmith shop. Tom heard the call to go west, so he packed up his family and his horse trailer and headed back to California, where he worked at Knottsberry Farm. He later moved to Rexburg, becoming involved with the LDS Church. His travels next led him to the Teton Mountains, where he lived the Native American lifestyle, honing his skills to live off the land, and began to breed and race sled dogs. The call of the wild grew stronger and led him to West Yellowstone. Finally, he made a 2,500 mile trek from Salt Lake City to Fairbanks, Alaska, where he calls home. Nestled in the mountains above Fairbanks, he built a small cabin off the grid to live out his days with his dog, Lil Sioux. Tom’s final resting place will be next to his beloved dog under the trees overlooking the mountains where they will set off on their new adventure together. He is survived by his beloved children Wade “Spur” (and wife, Michelle) Sheperd, Jeannie (and husband, Gary) Canode, Lane “Boots” (and his wife, Carol) Sheperd, and Tracy Cricket Sheperd, and his precious grandchildren, Jessica (Chris), Breanna (and husband, Matthew), Summer, Gabby (and husband, Tayler), Aodhàn, Aislinn, and Talia. He is also survived by his sister, Diane, and brother, Carl. Tom is predeceased by his parents and his brother, Graydon. Tom’s family will hold a small gathering to celebrate his life in Fairbanks this summer, and to spread his ashes among the mountains he loved so dearly. Please reach out to the family directly if you’d like to share in this celebration.

The family of Clayton Thomas Sheperd created this Life Tributes page to make it easy to share your memories.

Send flowers to the Sheperd family.