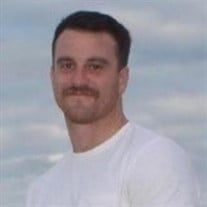 Clayton Archibald Osteen Fort Pierce, Florida Clayton Archibald Osteen, father, partner, son, brother and friend to so many, died on January 2, 2022 at the age of 24. He was born January 14, 1997 and was a life-long resident of Fort Pierce, Florida. Clayton was a Saint Lucie County Sheriff’s Deputy since 2019. In that short time, he became a SWAT team member, Deputy of the Quarter, and was awarded Deputy of the Year, 2020. He also served in the United States Marine Corp and led infantry Marines as a non-commissioned officer. Clayton was one hell of a funny guy, someone you could always count on in the time of need, and loved being an uncle. He absolutely adored his significant other and mother of his child. But of all his accomplishments, he was most proud of being a dad. Survivors include his newborn son, Jayce Walker Osteen of Fort Pierce, FL; significant other who passed away a short time later, Victoria Pacheco; mother and father Kathleen and Van Osteen of White City, FL; brother Zack (Valeri) Osteen of Fort Pierce, FL; nephews, Jensen and Jaxon; and niece, Mariah. Visitation will be held on Friday, January 7, 2022 from 6-8 PM at Westside Church, 3361 S. Jenkins Rd, Fort Pierce, FL 34981. A funeral service is scheduled on Saturday, January 8, 2022 at 1:00 pm at Westside Church followed by interment at White City Cemetery.

The family of Clayton Archibald Osteen created this Life Tributes page to make it easy to share your memories.

Send flowers to the Osteen family.