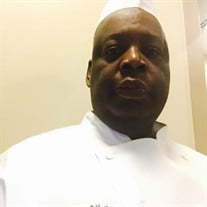 Chris Ottey passed away suddenly while at work doing what he loved most on Wednesday, May 11, 2022. Christopher Karl Ottey AKA “Chris” was born on May 24, 1964 in Kingston, Jamaica to Basil Ottey and biological mother, Jocelyn. Chris was raised by Marjorie Parker; the woman Chris considered his true mother. While Chris’ first marriage ended in divorce he found true love with his next wife, Flore. Chris met Flore through his longtime friend, Susie. Chris and Susie had a friendship that spanned 30 years. He affectionately called her “Tatie.” Chris attended culinary school in Jamaica before transferring to St. Augustine, Florida. After completing his culinary training in St. Augustine, he chose to specialize international cuisine. During his career he was a traveling chef, as well as an Executive Chef. Chris was a very talented fruit carver and showed off these skills with exquisite displays. Chris was a loving husband, father, brother, uncle, and cousin. With a lucky few, he was a loyal and trustworthy friend. Chris loved to travel and made many trips to the Caribbean and throughout the United States. In July of 2018, he experienced his first Royal Caribbean Cruise. Chris is survived by his wife, Marie Lourdes Michel; son, Adrian Ottey; beloved mother, Marjorie Parker; brothers, Ainsley Malvo, Derron Ottey, Andrew Ottey and Edward Ottey; sister, Corene Ottey- Alexander a long with numerous of nieces, nephews, and great friends. A visitation will be held Friday, May 27, 2022 from 3PM to 6PM at the Haisley Tribute Center with a Service to be held on Saturday, May 28, 2022 at 11AM at the Haisley Funeral Home Tribute Center 2041 SW Bayshore Blvd Port St. Lucie, FL.

Chris Ottey passed away suddenly while at work doing what he loved most on Wednesday, May 11, 2022. Christopher Karl Ottey AKA &#8220;Chris&#8221; was born on May 24, 1964 in Kingston, Jamaica to Basil Ottey and biological mother, Jocelyn.... View Obituary & Service Information

The family of Christopher "Chris" Ottey created this Life Tributes page to make it easy to share your memories.

Chris Ottey passed away suddenly while at work doing what he...

Send flowers to the Ottey family.