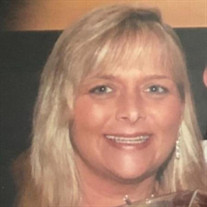 Christine A. (Snide) Woodin Christine A. (Snide) Woodin passed away in her home on Wednesday, December 22, 2021. Christine was born on April 20, 1962 in Rutland, Vermont to Melvin Snide and Stacia (Snide) Moriarty. She resided in Connecticut for 15 years prior to moving to Florida in 2002. She attended Holyoke schools in Massachusetts until later graduating from Chester High School in Vermont. Christine managed the Highland House in Londonderry with her first husband Timothy Hill of Chester, Vermont. During her time at the Inn, Christine developed a passion for gourmet cooking. She later married her second husband, Robert Woodin, and gained a stepson Jared, who she adored. Her and Robert remained friends over the years. Christine also loved traveling, cook outs, and spending time with family. She is survived by her husband, John Simpson of Fort Pierce, FL; stepson, Jared Woodin of Florida; mother, Stacia Moriarty of Chicopee, MA; brothers, Jim Snide and Carol Colson of Westfield, MA, Jeffrey Snide of Springfield, VT and John Snide of East Grandy, CT; sister, Wendy (Thomas) Ebelt of Davison, MI and many nieces and nephews. She was predeceased by her father, Melvin Snide and brothers, Brian and Wayne Snide of Westfield, MA. A service will be held by family and friends at a later date.

The family of Christine A. (Snide) Woodin created this Life Tributes page to make it easy to share your memories.