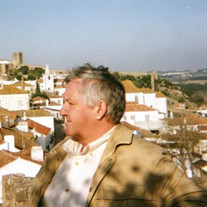 Charles Peterson, age 86, of Port St. Lucie, Fl., passed away peacefully at the Treasure Coast Hospice of Fort Pierce, on January 23, 2022. Formerly of Hanson and Pembroke, MA., Charley was the son of the late Carl R. Peterson of Boston, and Lillian Dubois Peterson of Hooksett, NH. Also, he was the longtime partner to the Late Linda Sullivan of Weymouth, MA., and the father to the late Erik Peterson of London, England. He is survived by his son Michael Peterson, and his wife Maureen, of Somerville, MA., his stepdaughter Paula Coffey, and her husband, Al of Port St. Lucie, FL., his ex-wife Meredith Parris Peterson of Port St. Lucie, Fl., and his daughter-in-law, Kylie Naughton, of London, England. In addition, he is survived by his two grandchildren, Michaela Peterson of Nashville, TN, and Matthew Coffey of Port St. Lucie, FL. Furthermore, he leaves behind many cherished nieces and nephews. Growing up on a chicken farm in Hanson, MA., during the throes of the depression and the onset of WWII, Charley would graduate high school from his beloved Hanover High, where he would excel in football, basketball, and baseball, earning All-South Shore Honors as a linebacker on his league champion football team his senior year. He would go on to the University of Massachusetts, Amherst after graduating from Hanover, before leaving to serve in the Army at the tail end of the Korean Conflict. The military, the veterans who served, and his country were to become one of his two great passions, the other would be his family and community. Not long after his return from Korea, he would marry Meredith, in the sleepy town of Pembroke, MA., where they would raise two sons and he would immerse himself in the community, serving as Pembroke Mail Carrier for thirty years, as well as the town’s Veteran’s agent. He also volunteered in Little League Baseball, PAL Basketball, and Pop Warner Football, as coach, referee, umpire, and overall mentor to the youth he so adored and bonded with. After retiring from the Post Office, he would enter in what would become a long-term partnership with Linda Sullivan, and together they would mentor her many nieces and nephews. He would also play a key role in the raising of his first grandchild, Michaela. “Papa Charley” gave her an education on how to engage in complete silly behavior and never missed one of her horseback riding events and witnessed her graduation from Skidmore College with honors in silliness and other academic achievements! With Linda, he would ultimately retire to Port Saint Lucie, FL., where they would assist Paula and Al, in raising his second grandchild, Matthew. Again, Papa Charley tutored Matthew on the importance of being silly and was his biggest fan, be it football, karate, fishing, scuba diving, or hunting. A true Peter Pan character, it is Charley’s relationship with children which will be his lasting legacy. For whatever their passion, be it football with son Michael, a jazz combo with son Erik, horseback riding with granddaughter Michaela, fishing (and fish stories!) with grandson Matthew, figure skating, lacrosse, hockey or football with his nieces and nephews, the sport or the endeavor did not matter as much as the family member whose support he gave with all his heart and soul. Likewise, the adults in his world would buzz to him as moths to light. For all whom he came into contact with, longed to bask in the warmth, fun, and good cheer that he radiated from within. Sweet Dreams Big Guy!

Charles Peterson, age 86, of Port St. Lucie, Fl., passed away peacefully at the Treasure Coast Hospice of Fort Pierce, on January 23, 2022. Formerly of Hanson and Pembroke, MA., Charley was the son of the late Carl R. Peterson of Boston, and... View Obituary & Service Information

The family of Charles W. Peterson created this Life Tributes page to make it easy to share your memories.

Send flowers to the Peterson family.