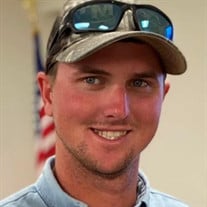 Chad Diffee, a life-long resident of Stuart and Fort Pierce, FL died unexpectedly on February 17, 2021 at the age of 24 in a tragic car crash on his way home from work late at night. Chad leaves behind his father, Michael Diffee, mother, Joan Binder Diffee (Fort Pierce, FL), older sisters, Dana Diffee (Nashville, TN) and Hillary Diffee (Norfolk, VA), grandmother, Marguerite Diffee (Miami, FL) and most beloved girlfriend, Payton Savikas (Palm City, FL). He is predeceased by his grandfather and grandmother, Raymond and Naomi Binder, and his grandfather Hugh Diffee. Chad was born at Baptist Hospital in Kendall, FL on Dec 18, 1996 to Michael Edward Diffee and Joan Marie Binder. Chad spent most of his life in Stuart, FL, attending Crystal Lake Elementary, Anderson Middle School and graduating from South Fork High School (SFHS) (2015). Chad graduated from Southeast Lineman Training Center (SLTC) in Trenton, GA in December 2015. Chad returned home to South Florida; worked for IRBY Electric and Pike Electric before landing a job with Florida Power and Light Company (FP&L), where he worked his way up to journeyman lineman. Chad was a member of the International Brotherhood of Electrical Workers (IBEW) Local 627 and was a life member of the National Rifle Association (NRA). He purchased a house and resided in Ft. Pierce. In his spare time, Chad loved hunting, fishing and doing anything outdoors with his girlfriend, Payton and his buddies. He is remembered for his adventurous lust for life and his loving heart. If you were looking for Chad, you might check for him in a tree stand or riding around in the Florida fields and swamps on his four-wheeler. Those who were blessed to know Chad would likely remember him as a loving son and brother, a peacemaker, a loyal friend, a reliable teammate, an impassioned lineman who gave every assignment his all, and the source of so many laughs. A Funeral Mass is scheduled on February 27th at 10 am at Saint Christopher Catholic Church in Hobe Sound, FL. Following Mass, the family will host a memorial with a time to share, followed by a visitation from 2 - 5 pm at Haisley Funeral Home in Fort Pierce, FL. Chad’s family is collecting a scholarship memorial fund in his name, which will be donated to the SLTC for a deserving high school graduate who is interested in the lineman trade. If you would like to donate, please visit the GoFundMe page at https://www.gofundme.com/f/chad-diffee-memorial-fund?utm_campaign=p_cf+share-flow-1&utm_medium=copy_link&utm_source=customer. His family thanks you for your continued prayers, thoughts and generosity.

Chad Diffee, a life-long resident of Stuart and Fort Pierce, FL died unexpectedly on February 17, 2021 at the age of 24 in a tragic car crash on his way home from work late at night. Chad leaves behind his father, Michael Diffee, mother, Joan... View Obituary & Service Information

The family of Chad Diffee created this Life Tributes page to make it easy to share your memories.

Chad Diffee, a life-long resident of Stuart and Fort Pierce,...

Send flowers to the Diffee family.