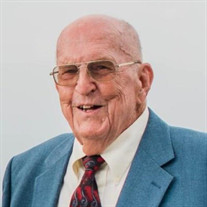 Bernard R. Craft Bernard “Bernie” R. Craft passed away unexpectedly on April 18, 2022 in Fort Pierce, Florida. He was born in Saint Marys, Ohio on August 17, 1930 and resided in Fort Pierce, Florida. Bernie enjoyed landscaping, traveling, and playing golf during his retirement. Bernie leaves behind his loving wife of 67 years, Beverly Craft of Fort Pierce, FL; four children, Steve Craft of Charlotte, NC, Stephanie Craft Salsich of St. Louis, MO, Susan Craft Clontz of Gastonia, NC and Scott (Marla) Craft of Boise, ID; six grandchildren, Neil Salsich, Elizabeth Salsich, Charlie Craft, Henry Craft, Ty (Courtney) Clontz, and Frank Craft. He was preceded in death by his 4 brothers and 2 sisters. Bernie graduated from Ohio State University. He served as a pilot in the U.S. Air Force and was stationed at Patrick Air Force Base in Cocoa Beach. He was a member of the Elks, Kiwanis, Fort Pierce Yacht Club, and Indian River Presbyterian Church. In lieu of flowers, please make donations to the above and/or to the Colonnades Landscape Fund. There will be a Celebration of Life from 2:00-4:00 PM at the Colonnades Clubhouse on Saturday, April 30, 2022. He will be greatly missed.

The family of Bernard R. Craft created this Life Tributes page to make it easy to share your memories.

Send flowers to the Craft family.