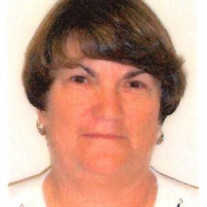 Barbara Ann McCallister died peacefully at Treasure Coast Hospice of Fort Pierce, FL at the age of 75 on January 27, 2021 after a long difficult struggle with cancer. Barbara was born in Abington, PA on May 31, 1945 to Andrew and Doris Snowden of Willow Grove, PA. she graduated from Abington High School in 1963. After graduation, Barbara worked for PSF Bank in Philadelphia, PA. In 1964 she married James (Ron) McCallister. She and Ron lived in Jamison, PA where she worked for the Bucks County Boy Scouts. They later moved to Warminster, PA where she worked in the District Court for several years. She was eventually hired by US Restaurants as a General Manager for various Burger King Chains then for Rite Aid Pharmacy as the store manager, lastly, she was employed by Wendy’s Fast-Food Corporation as a store manager until her retirement. During their life together, Ron and Barbara had three sons, James Andrew (Drew) McCallister, Jeffrey Allen McCallister, and Stephen Scott McCallister. After they were both retired, in 2006, they moved to Golden Ponds of Fort Pierce, FL. They joined the homeowner’s association there where Barbara was eventually elected president of the association. Later she joined the COP’s (Citizen on Patrol) of Saint Lucie County Sheriff’s Office and Guardian AD Litem where she was an advocate for abused and neglected children. She assisted with many cases and testified numerous times on their behalf. She was instrumental in her assistance with placing children in their permanent adoptions. In 2011, Barbara was selected by Florida Governor Rick Scott as “volunteer of the year” for the Nineteenth Judicial Circuit. She braved through the year 2020 although she was limited due to her illness. Barbara is survived by her loving husband Ronald “Ron” McCallister of Fort Pierce, FL; sons, James Andrew “Drew” McCallister, Jeffrey Allen McCallister, and Stephen Scott McCallister; grandchildren, Sean and Jessica McCallister of Milford, PA, Brittany Gorman of Sellersville, PA, Justin Grams of Willow Grove, PA, and Kyle and David McCallister of Quakertown, PA; Great-Grandchildren, Alexander, Thea, and Winter Gorman of Sellersville, PA, Raelynn McCallister of Quakertown, PA, and Gioa Grams of Willow Grove, PA. Currently there are no services scheduled in Fort Pierce, FL. Her final resting place will be at the National Cemetery in Sarasota, FL. A celebration of life will take place in the future in Quakertown, PA. In lieu of flowers the family requests donations to go to the Treasure Coast Hospice of Stuart, FL or to Voices for Children at 584 NW University Blvd. Suite 600 in Port Saint Lucie, FL. The family also requests that family and friends “pay it forward” by helping someone in need.

Barbara Ann McCallister died peacefully at Treasure Coast Hospice of Fort Pierce, FL at the age of 75 on January 27, 2021 after a long difficult struggle with cancer. Barbara was born in Abington, PA on May 31, 1945 to Andrew and Doris Snowden... View Obituary & Service Information

The family of Barbara Ann McCallister created this Life Tributes page to make it easy to share your memories.

Send flowers to the McCallister family.