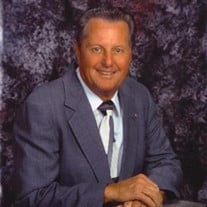 Anton “Tony” John Young was born on August 27, 1933 in Gakova, Yugoslavia. On February 22, 2021, he entered Heaven’s gates and reunited with his precious “Babs.” Tony’s early life was marked by adversity. In the closing days of World War II, Tony lost both of his parents to war, soon finding himself imprisoned in one of the concentration camps established by the Yugoslav government. Family smuggled Tony out of the camp and into Austria, where—in 1948—he was able to immigrate to Canada. At 14 years old, Tony began attending first grade classes to learn the English language. By the age of 15, he had mastered the language but was on his own. Tony worked hard to build a life for himself and his family. As a teenager, despite needing to leave school to work on the farm, Tony used the money that he saved to pay for tutoring. In 1950, he met the love of his life, Barbara Brandner. Tony and Barbara were united in holy matrimony on November 7, 1953. Their union was blessed with four children. In 1961, Tony obtained a job with General Motors, which took him, Barbara and their children to Flint, Michigan. For the family, Flint would become home, and Tony worked for General Motors for over 30 years. In 2002, Tony and Barbara moved to Florida full-time. There, they enjoyed active lifestyles, as well as frequent visits from family and friends. Eventually all four of their children ended up moving to Florida, which made Tony, the consummate “Family Man,” the happiest ever. Tony’s faith was an important component of his life. While living in Flint, he was involved in the St. Paul Lutheran Church community. Later, when Tony and Babs settled in Florida, they became very active members of Grace Lutheran in Port St. Lucie. Tony was a survivor and a hard worker. He was the most ethical of people and taught his family that it’s not the material things that matter. A loving husband and father, he treasured his family and embraced every moment with them. His mantra was always Faith, Family, and Friends. His incredible life journey and example will forever be cherished in the lives of his family. Tony was preceded in death by his wife Barbara “Babs” Young, his sister Mary, his brother-in-law Martin, and his son Ronald Young. He is survived by his son Richard (Theresa) Young, his daughters Linda (Jacques) Lamothe and Lori (Tim) McAlear, and his two grandchildren Jordan Lamothe and Lauren Lamothe. He is also survived by his brother-in-law Walter (Ilene) Brandner, cousins Ray (Janet) Jung and Burga (Demos) Jung, and many other cousins, nieces, nephews and great nieces and nephews. A “virtual” funeral service celebrating his life will be held on Saturday March 6th at 3:00pm. The service can be viewed at www.GraceLutheranPSL.com/TonyYoung In lieu of flowers, the family is asking for donations to: Grace Lutheran Church Alzheimer Daycare Building Fund 555 SW Cashmere Blvd Port St. Lucie FL 34986 772-871-6599

The family of Anton "Tony" John Young created this Life Tributes page to make it easy to share your memories.

Send flowers to the Young family.