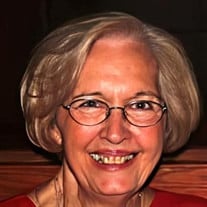 Alice Joann Crosby Alice “Joann” Crosby, 81, of Fort Pierce passed away on March 6, 2022. Born in Vero Beach, Florida she spent her formative years living in Fort Pierce and graduated from Dan McCarty High School in 1958. That same year she married the love of her life, Kenneth E. “Gene” Crosby of Vero Beach. Together they became a military family as Gene joined the Air Force shortly after they married. They spent the next 22 years living on Air Force bases across the United States and around the world, during which time they raised three children together; Kim, Ken Jr., and Joe. In 1980, after Gene’s retirement from the Air Force, they settled back in Fort Pierce where Gene began a second career with Florida Power & Light and Joann earned a Bachelor’s degree in Education from Florida Atlantic University. Joann taught in St. Lucie Public Schools for many years, eventually retiring from Forest Grove Middle School to join Gene in retirement. Post-retirement, Joann and Gene were able to devote themselves to their passions, which included visiting and hosting their four grandchildren, continuing their world travels, and watching their beloved Florida Gators as season ticket holders. Their adventures included a second home in Dunnellon where they owned a condo on the Withlacoochee River. Joann became a certified diver and grilled cheese chef and Gene was the courageous captain of a pontoon boat that served him, Joann, and the grandchildren well on their Sundowner Tours which included sunset trips on the river trolling for gators and other wildlife. The driving force behind a life filled with service and love was Joann’s faith. Joann and Gene were active members of Parkview Baptist Church in Fort Pierce. Joann was known in church for her quick wit, Biblical insight, and mission mindedness. She taught Sunday School and was a pillar in the congregation, serving on multiple committees supporting the church and it’s work in the wider community. The highlight of every summer for Joann and Gene was their work with World Changers. Through this service organization, the couple were able to impact countless young lives and were energized and inspired to see young people committed to a life of service and giving back. Joann was preceded in death by her adoring husband, Kenneth E. “Gene” Crosby, her beloved son, Kenneth E. Crosby, Jr., her parents, Alice Leona and Joseph Raymond Zanni, her sister, Phyllis Earline Miller and her brother, Richard “Dickie” Wall. Joann is survived by her sister Linda Babilius of Tampa; her daughter, Kimila Day (Donald Scovill) of Atlanta, Georgia; son, Joseph R. Crosby (Stacey Register) of Vero Beach; daughter-in-law Shari Crosby of Dumfries, Virginia; grandchildren Sara Thomson (Hunter Thomson) of Falkirk, Scotland; Lauren Koontz (Ryan Koontz) of Falls Church, Virgina; Christopher Day of Atlanta, Georgia; and Emily Purvis (Brad Purvis) of Gainesville. Her last years were highlighted by the births of her great-grandsons, Ethan Koontz and Otis Purvis. Please join us in celebrating a life full of loving family, devoted friendships, and happy memories. Visitation will be held on Friday, March 11, 2022 from 4:00-6:00 PM at Haisley Funeral Home, Fort Pierce. A service will be held at 12:00 pm on Saturday, March 12, 2022 at Parkview Baptist Church. In lieu of flowers, donations can be made in Joann’s name to VNA & Hospice Foundation (https://vnatc.org/waystogive/).

The family of Alice Joann Crosby created this Life Tributes page to make it easy to share your memories.

Send flowers to the Crosby family.