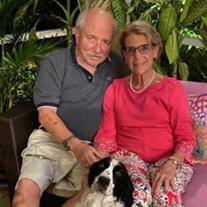 Alfred (Al) L’Eplattenier, 75 of Port St. Lucie, Florida died on Monday, July 19, 2021 after a short illness. He was the son of Alfred L’Eplattenier and Edna L’Eplattenier (Willis) born in Queens, NY March 10, 1946. A native of New York, he graduated from John Jay High School, Katonah, NY in 1964. He received a BS Degree in Civil Engineering from The Citadel, Charleston, SC in 1968 and his Professional Engineering License (PE) a couple of years later. After working 2 years in NYC for Staunton & Freeman, Al joined International Underwater Contractors (IUC) in City Island. There he became licensed as a Commercial Diver (hard hat deep sea diving) and shortly thereafter was assigned to Scotland to work on one of the oil rigs in the North Sea. His IUC Supervisor was Stanley G. Kellogg (his wife’s brother, although Al and Gillian didn’t meet until two years later). Returning to the US, Al formed his own company, L’Eplattenier & Associates, Inc., specializing in underwater inspections. During this period, he did consulting work for Con Edison, NYC, the NY Tunnel and Power Authority, Several NYC Bridges- Pilings (above and below water), support systems, rebuild of the McCoombs Dam Bridge, the Triborough Bridge, and the Whitestone Bridge, inspecting all the pilings under the LaGuardia Airport Runways, Nuclear Power Plant outflow pipes, Boston Bridge and Tunnel Authority, NY State Dam and Water Authority (DEC) just to name a few. Some of this work Al accomplished as Resident Engineer while employed by Brand Marine Construction Co., Inc and later with Parsons Transportation Group Inc. of New York. In Hawaii, he was general manager of all the Civil work at Mauna Lani Resort, a 1000-acre property for Pan Pacific Construction. Al was an ardent athlete. He was on the wrestling team both at John Jay High School, in Katonah, NY and at the Citadel. He loved skiing, tennis, pickleball, swimming, sailing (he and Gillian had their own sailboat on the East Coast for many years). He became a Brown Belt in Judo with the Watanabe Judo Club in Westchester, NY. He later attended a specialized boxing program for Parkinson’s patients in NH and Port Saint Lucie. Al was a member of the Masonic Temple in Mt. Kisco, NY, and a member of the Citadel Honorary Society, Tau Beta Pi, being distinguished by high attainments in Engineering and Scientific knowledge. In Rindge, NH, Al served on the Budget Advisory Board and was active in various Town affairs. Al is survived by his loving wife; Gillian of 42 years, stepson Chris R Miller (Julie), stepdaughter, Tanya J Miller-Rade (Richard), grandchildren, Richard Rade III, (14), Emily Rose Miller (18), and Ella Bleu Miller (16), all of Long Island, NY a brother Richard L’Eplattenier (Lynn) and a sister Nadine L’Eplattenier both of Birmingham, AL, as well as many nieces and nephews. A gathering will be held on August 11, 2021 from 1PM-3PM with a service to start 3PM at the Haisley Tribute Center 2041 SW Bayshore Blvd, Port Saint Lucie, FL 34984. In lieu of flowers in memory of Al, a gift or check can be sent to: Class of 1968 Legacy Scholarship at Foundation.Citadel.edu or Citadel Foundation 171 Moultrie Ave. Charleston, SC 29409 A Memorial Service will also be held on Sept. 20, 2021 at the Cathedral of the Pines, 10 Hale Hill Rd., Rindge, NH 03461. Services from 1:00-2:30 pm in the outdoor sanctuary followed by a reception at the Hilltop House from 2:30-4:30 pm.

The family of Alfred "AL" L'Eplattenier created this Life Tributes page to make it easy to share your memories.

Send flowers to the L'Eplattenier family.